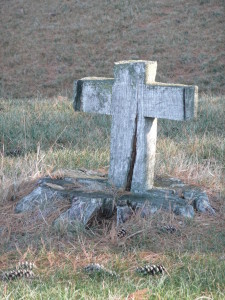 The cross of Jesus Christ is a powerful symbol and its monument is sacred to His followers. (author’s collection)

I just watched a video of Bishop Robert Barron,  chief pastor of the diocese of Rochester-Winona in Minnesota as he re-consecrated a desecrated Catholic Catholic cemetery in Rochester. Over last Halloween evening, vandals entered Calvary cemetery and spray painted obscenities and hateful graffiti on the headstones and other structures there.

“This is holy ground,” the Bishop says. He is vested in white cope and miter with acolytes and seminarians assisting him and a large number of lay people present. His informal words of gathering are spoken in sadness at the desecration of the holy ground containing so many family members — men, women, and children who have gone before us in the Faith.

Cemetery workers stripped and scrubbed away the graffiti so that most of the monuments are now cleansed and restored. Bishop Barron thanks the workers and then offers official prayers that the Catholic Church recommends for re-consecrating a cemetery. He is somewhat hunched over as he walks down the main road among the tombstones casting showers of holy water toward the monuments and the ground.  It is a baptism, a re-birth of this hallowed ground where loved ones lie awaiting the Resurrection.

We have just passed through an ugly, political campaign. It was often vicious and profoundly disrespectful.  However, demeaning and hateful attacks do work, says Chris Christie, a seasoned politician and recent guest on WGN’s The John Williams Show. Even lies and false statements about the character of opponents are now standard by those who want to lead us in government. After months of this type of hateful speech, do we expect that anyone would care about graffiti defacing and dirtying our holy images and sacred spaces?

Was the desecration of a cemetery just a juvenile prank for Halloween? The act of spray painting sacred images and monuments with vicious slogans and the name of the evil one seem more intentionally hurtful to me, not the work of children or even young people.

« A Birthday Gift.
Advent: Hungry for the Light. »