The message of St. John the Baptist always shakes me up –which is what prophetic preaching is supposed to do. Here he is  ranting at the Pharisees and the Sadducees:  “You brood of vipers!  Who warned you to flee from the coming wrath?  Produce good fruit as evidence of your repentance.” (Mt 3:7b-8)

Just across the street and in front of the Puerto Rican congressional building in San Juan (named after the Baptist) is a bronze sculpture of John extending a long bony arm toward the building where laws are made and policies are decided for the citizens of Puerto Rico. John appears to be coming out of a crouch as he raises his arm while with his right hand he extends an accusing finger at the legislators’ sanctuary across the street.

Billy Sunday, a tent evangelist in the early twentieth century, used to preach hell-fire and brimstone from a similar crouch as he railed against “demon-rum” and chopped the air with his open hand for emphasis.  He and another Billy  (Graham) were the greatest preachers of their time.  They preached repentance with the power of the Holy Spirit and the urgency of John the Baptist. 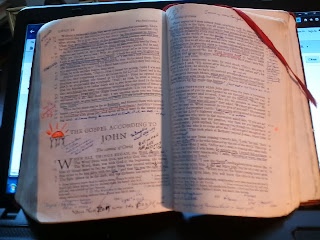 John, lays aside this intensity as he talks about the one whose sandal straps he is not worthy to loosen. He points to the Lamb of God and then shows the way for his disciples to find the Messiah.

John the Evangelist called John Baptist a “witness” to the Light. “He was not the light but he came to give testimony to the Light which was coming into the world.” (John, Chapter 1)

Remembering John the Baptist’s words, we realize that we
still have time to repent as we light the third candle this Advent Sunday.  What a great opportunity to experience God’s grace on the way to celebrating Christmas!