I was thinking this morning that the Creator must have warmed to the joy of fashioning nature. Look around and see His art and listen to His tunes. All of nature is so varied and interesting. And, it’s beautiful.

This morning I’m outside in my backyard on my birthday watching and listening. Suddenly I’m thinking: “What bird is that?” The song was new and complex, coming from two backyards away. It continued for some minutes. At first, I thought it was cardinal because the sound was flute-like and regularly melodic. But then it changed the melody and didn’t sound at all like a cardinal song.

I was surprised when the bird landed in a bush fifteen feet from me and began his song again.  What’s he doing (assuming it is a he) singing in late summer? Bird song belongs to setting up territory and nest building, doesn’t it? 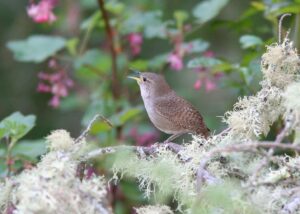 , curved slightly downward. Is it a Brown Thrasher? Too small. Nuthatch? The beak is not that prominent. Uncommon sparrow? Not with that beak!

I concluded it was a house wren. I am not certain because I didn’t notice the prominent upward position of the tail with its distinctive bands. Maybe this bird didn’t read its description in the latest guide to America’s birds. He was hidden most of the time by the leaves so he wasn’t easy to see but he hopped around in the bush, just like a wren.

So, I heard a new song as I began a new year.

If I continue to listen to the life around me, nature will likely continue to teach me new things. Maybe it will even teach me a new song of my own to sing.

I could use some new melodies and some fresh lyrics as I begin another year.