It’s always fun to read Matt Malone’s editorials. He’s the editor of America, the venerable Catholic magazine produced by the Jesuits. In March, he wrote about what he called “Politics in a Fallen World.” He relates that the second President Bush in justifying the invasion of Iraq by the U.S. either lied directly to the Am 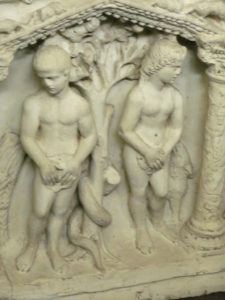 erican people about the danger of an unstable Iraq or thought that what he said was true.  If Bush II deceived us, what he did was and is evil. However, in the latter case–he just didn’t understand things–Bush showed his incompetence as a leader. Adam and Eve are probably watching from their place in heaven and shaking their heads and in unison sayin, “Will they ever learn?”

We live in a fallen world, an original sin world, according to Catholic belief. Somewhere around 1700 that belief was replaced with  the “imperfect society” idea. That philosophy holds that all we have to do to make the world better is to re-organize, fix the things in society that are wrong and we will have a good, decent society. Of course, there is no due date for this ideal world to emerge.

In the Christian faith, our idea of humanity is that it is broken and can’t be fixed, only redeemed and resurrected.

Original Sin lingers.   On page two of the bible our original parents, Adam and Eve, suffer the sinful lives of their children.  Brother Cain, the farmer, is jealous of Brother Abel, the shepherd.  Envy consumes Cain and he finally murders his brother. Abel’s blood cries out from the soil for vengeance. For the rest of his life Cain wears a mark which identifies him as cursed by God. The race of Cain becomes the hated Canaanites who the contemporaries of Jesus called the “dogs.” Yep. Prejudice, discrimination and racism in all their forms keep insinuating themselves into our attempts to make things better. We live in a world where both sin and grace are not acknowledged. But, we Christians acknowledge both and that only redemption by Jesus Christ can perfect our society.

Without grace all of our plans to build a perfect society end up in wreckage. . Someone is yelling from shore, “Hey! Where’d your ship go down?” We look around and sure enough, we are still safe, on a raft. We have God’s grace.  We are not going to sink after all.