Religion should be about healing.  We need to be healed from our sins and restored to our original destinies.  So, as  priest I think of myself as a healer, not that I have any personal powers to make whole again, I am a conduit for the healing mercy of God, otherwise, I have very little use.  I heard an American Indian elder say once: “What good is a religion that does not heal anyone?”  I agree.

I am against all sickness, physical and spiritual.  From the time I was a young man I have thought that spiritual and physical healing are really one thing. That’s part of the reason that I went on in medicine and became a physician assistant. That profession added to my priesthood has allowed me to understand better what healing is about. As a physician, if you heal only the physical sickness, you miss the effect that sickness has had on the patient’s personhood.

Recently, measles has reappeared after years of control. Some parents feel that there is enough evidence to convict the measles vaccine of causing autism. Even though this opinion has pretty much been debunked, parents still are not sure and some of them are refusing to allow their children to be vaccinated.  Unfortunately, these are the children who are contracting measles.  If any of those children come in contact with children under two who are not yet eligible to receive the measles vaccine,  the contagious children could spread the virus to these infants and toddlers whose immune systems are not sufficiently developed to combat the powerful measles virus.  They can die from the disease.

Parents are agonizing over their responsibility to protect their children. What if the measles vaccination does somehow cause autism? Do I run the risk of having a child suffer with autism because I allowed him/her to be vaccinated? Do you see the spiritual suffering of parents who are wrestling with the concept of vaccination?

Benjamin Franklin lost his son Frankie to smallpox.  He could have had the child inoculated (not vaccinated) with a small amount of tissue from an infected person.  People who were inoculated did generally come down with smallpox but a less virulent form and most survived with immunity from further disease. Franklin had decided not to inoculate his son:

“In 1736 I lost one of my sons, a fine boy of four years old, by the small-pox, taken in the common way (he contracted it through contagion from someone else).  I long regretted bitterly, and still regret that I had not given it to him by inoculation.  This I mention for the sake of parents who omit that operation, on the supposition that they should never forgive themselves if a child died under it; my example showing that the regret may be the same either way, and that, therefore, the safer should be chosen.” (The autobiography of Benjamin Franklin).”

In January of this year, during his flight back from the Philippines, Pope Francis announced that he is going to canonize Father Junipero Serra, one of the founders of California and originator of the mission system in both upper (the present day state of California and  lower (Baja) California, Mexico.  Serra died in Southern California in 1784.

As reported by the Los Angeles Times,  the pope was chatting with reporters on the plane back to Rome when he announced his intention to by-pass the extra miracle usually required for canonization and proceed with the canonization of Blessed Serra because Serra was a great evangelizer.  Pope Francis makes the point often that the Church must preach the Gospel of Jesus Christ, boldly and tirelessly. Pope Francis’ announcement is going to again stir up a controversy that originally arose at Serra’s beatification.

Several indigenous groups in California claim that Serra was a brutal taskmaster who helped to enslave the Indians and forced them into the Catholic Faith.  In other words, these groups are certain Serra was an agent of the conquistadores who were after land, money and power.

Junipero Serra was a Franciscan friar who left Spain  and a comfy job as a theology professor  to become a missionary in the mid-eighteenth century.  He was thirty-six years old and had a gimpy leg when he disembarked from his ship and walked to Mexico City, a long, arduous journey. This guy was tough! He disciplined himself severely with scourgings  and deprivations in an attempt to stay on the straight and narrow path.  He was a natural leader, a powerful speaker and a tireless worker, all in all, a formidable presence wherever he went. He was going to advance the Gospel in the new world, or else!

Fray Junipero Serra did not spare the rod with children and adolescents –and even adults. In his day, the path to learning and Christian development was by discipline, often physical. Just as Serra had received discipline from adults in his development, he employed the same methods in his training of the Indians.   He wanted to convert as many Indians as possible and bring them into the kingdom of God.

Perhaps, Pope Francis will use Serra’s canonization as an opportunity to ask for forgiveness of the First Nations of California for the excesses of the Catholic Church as it evangelized and established its missions.  It won’t be the first time Pope Francis washed the Church’s soiled linens in a public forum. The pedophilia scandal and corruption in the Vatican curia are already in the laundry. 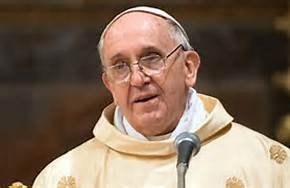 Lent 2015 is rapidly approaching and Pope Francis wants every Catholic to open up to new ways of thinking about Catholic values, especially attention to the needs of the poor.

In his message for Lent 2015, Pope Francis shares his belief that in our western culture, indifference has closed the door to many hearts.  Nothing seems to matter much anymore. Or, to put it in another way, if all opinions are equal, there are no authentic values. Cultural indifference means no superior values.  Then, for what ought we to  give our lives?  If every opinion has equal worth where is truth?

Pope Francis reminds us that it’s too easy to say that everyone’s opinion is valid and, therefore, valuable.  Some opinions are narrow minded or dangerous, or just dumb.   Yes, I know, I am judging. What’s wrong with that? If you remind me of Jesus’ warning not to judge lest I be judged, then  think of the times Jesus confronted a questioner with a scenario where that person needed to make a judgment, a judgment on the conduct of someone else.  Lent 2015 is a gut-check for the practice of mercy and Pope Francis is relentless in reminding us of this.

The story of the Good Samaritan  (Luke 10:25-37) who stops along the road  to assist an injured member of the Jewish community involves judging that a priest and a levite faced with the same opportunity both failed to live up to the covenant value of mercy.

“Who was neighbor to the man who fell in with robbers, Jesus asks?”  “The one who had mercy on him,” is the response.  “Go and do likewise” is the command of Jesus. Maybe the opinion of the priest who passed by the roadside victim would be credible enough to you to justify his inaction.  It could have been that the priest was in a hurry to get to Jericho to assist his family there. The levite, too, could have been worried that he might have ended up a victim of the same band of robbers so he hurried by the  injured man.  But, the value Jesus places on mercy and the urgency of the need makes the priest and the levite look like sad examples of living the covenant.  Who practiced the covenant virtue of mercy?  A Samaritan. A despised member of a schismatic sect.

In the language of contemporary America, we Christian have to “make a difference.”  Pope Francis tells us that we cannot be indifferent to the poor, to the foreigners among us or to the suffering in nations far from our shores.

Lent 2015  is a great time to remind ourselves of the active part of our faith.  So, rather than give up something — candy, cigarettes, our favorite TV program — instead, Francis urges us to give something away. Give your time away to someone who asks you for help; give your money away to the street-person who asks for something; build something with your talent for someone else.

It may be commendable to give up video games or texting for Lent. It could give you bragging rights.  “Hey, I went all of Lent 2015 without texting once!”  It shows how strong you can be, how determined. But, that’s not what Lent is supposed to be. It’s not to make me better, but to make the world better.

This Lent Pope Francis calls us back to the practice of mercy, the value which is so essential to the Christian life and so opposed to the culture of indifference. Francis asks that we allow our hearts to be touched by poverty so that we do something that costs us our own pride.  The old refrain of WWJD should be dusted off and used everyday of Lent 2015: “What Would Jesus Do?”