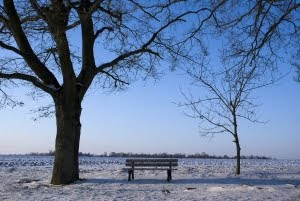 I wish I would have had my camera.  It was Sunday morning around 9:30 AM and frigid temperatures kept  most Chicagoans inside. But it was a morning full of sunshine and I thought it would be a good day to go to the Lake. So, I drove to Montrose Harbor. Chicago’s Lake Michigan harbors are great places to get to know the city.

A few hardy runners were out and some Canada geese were moving around, but not much else. There are millions of people in Chicago but only my car and another vehicle were parked facing the water which fronts the Magnificent Mile.  On a quiet, windless day, the harbor’s water mirrors a picture-postcard image of downtown Chicago, including what used to be called the Sears Tower.

With a hazy blue sky above, bare trees and a lambswool blanket of snow,  the Sunday morning scene was breathtaking. That’s before I stepped out of the car and into the zero degree sunshine and literally had my breath taken away.

There was something new in the scene this morning at the harbor.  Someone had built a snowman there. It stood man-high with dark buttons of coal down its front, black eyes and somehow — rosy cheeks.  He was a sturdy fellow made from three mounds of snow, with the largest mound as its base and the other two forming its body and head. Two spindly branches stuck carelessly into the snowman on either side gave the illusion of welcoming arms. He had a jaunty knit cap on his head and a big smile on his face, a smile for Chicago.

I hadn’t been there for five minutes when a young man dressed in jeans and a light windbreaker arrived with a violin. He approached the snowman, bowed to it and beckoned some friends to come over. A second man toting a guitar arrived. Then another with a long drum attached to his front, and finally, a third with a large guitar-like instrument slung across his chest.  They joined in a jaunty line and began to circle the snowman.

Suddenly, another man with a flute appeared and jumped into the circle of his friends. The floutist led and as he piped  each musician followed him. They danced around and around the snowman sending waves of joyful music out into the icy morning air of Montrose Harbor.
I got out of the car and asked one of  the group where they were from. “Ecuador,” he said, laughing.
They were all cold, this group of male troubadors, but they were having fun and got the entire song and dance in before the cold made them move toward their cars where some geese were hanging around hopefully.

“Pajaritas!” yelled the drummer. The band gathered around a flock of five Canada Geese and played another song for the geese, all the while laughing and enjoying their music and one another. They finished their dance and quickly piled into two cars and were gone.

I am going to come back to the harbor and photograph the smiling snowman.  I’ll just have to remember thethe dancing musicians.