I just watched the film, “All the Money in the World.  Remember the kidnapping of John Paul Getty, III?  Grandpa Getty was the richest man in the world, lived an incredibly extravagant life-style but was so stingy he’d wash his own undies and hang them on his antiques to dry.  When Tray was abducted, the Italian kidnappers demanded  seventeen million dollars which Getty refused to pay. The ransom was reduced but Getty still wouldn’t pay.  After his abductors cut off the boy’s ear and sent it to a London newspaper, Getty relented and promised four million. When the deal was ready to go through, at first Getty released only one million dollars. Finally, he came up with the other three million.  Paul III was released and the old man soon died.  After he died, the mother of his heir became the executor of the estate.

A story I remember from sixty plus years ago was an interview I watched on a grainy black and white T.V. screen -“LIVE FROM ENGLAND.” This was one of the first live interviews from overseas and the transmission was poor.  We could see, however, a black and white image of a seated, dour, prune-faced man with an unfortunately large nose.  The interviewer asked the richest man in the world this question: “Are you happy, Mr. Getty?” The response was a sour and emphatic” NO!”.  And then the old man who was richer than any man who had ever lived went on a tirade about his financial difficulties.  I guess he perceived himself as rich though he was always greedy for more.

Later, in the ’90s, “Greed is Good” became the hallmark of Wall Street. As capitalism’s spirit took over the hearts of financial wizards,  Michael Douglas had those mortal words to offer to an entire hall full stock brokers, financial advisors and those swooning in the financial air of blossoming investments.

Greed, one of the deadly sins opposes trust in the providence of God.  Think of St. Francis of Assisi who publicly divested himself of all his middle-class trappings, including taking off all of his clothes in the public square, while the bishop looked on horrified. Francis depended on God for everything: food, clothes, shelter, love.  He felt he had nothing to worry about — ever.  Along with the surety of God’s love for him, Francis experienced deep happiness.

I see so many people everyday moving fast, hurrying somewhere.  It’s a busy city. People everywhere motivated and on the move, searching for what will make them happy.  St. Augustine humbles us with this reminder: “You have made us for Thyself and our hearts are restless ’til they rest in Thee.” Not all the money in the world could buy us that peace. 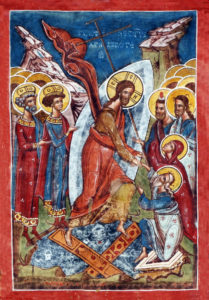 The eastern Church’s iconography of the Resurrection is always communal.  Resurrection theology in the eastern church celebrates the raising up of Jesus as an event involving all humanity. However, the images of Christ Resurrected in our western church, show Jesus alone, triumphant, depicting nothing of the history of fallen humankind. The eastern church has Christ resurrecting from a grave that shows death itself being destroyed with the gates of hell in pieces and Jesus leading Adam (and sometimes Eve) up out of the ground into the new life.

The Good news is that we each of us will rise and form part of the community of the resurrected. This concept  certainly embraces St. Paul’s descriptions of us as belonging to the resurrected body of Christ.

To me the consequence of the resurrection of Jesus is the establishment of the peaceable  kingdom.  Death and violence are done away with, but apparently not before there is a cataclysmic battle between the forces of Jesus and the army of the evil one.

After His death, Our Lord descends into hell, a belief we affirm each Sunday as we all recite the Creed together.  My uncle always refused to say that part of the creed because how can the All-Holy One experience the hell of the damned? That’s what our creedal formula sounds like it’s saying.  Of course, Jesus didn’t sink to the hell of the damned but to sheol, the abode of those who have died, a shadow world usually depicted as underground. It is out of this place of the shades, that Jesus rises in eastern icons.   Christ Himself breaks out of sheol, carrying with him the spirits of those who have gone before Him since time began. (https://www.catholicculture.org/culture/library/view.cfm?id=5549)

(See also”Christian Century,” an article by John Dominic Crossan and Sarah Sexton Crossan, “Rising up with Christ.” January 31, 2018.vol. 135, No. 3, p. 22 -25. )The text isn’t so great but the images of resurrection are beautiful and illustrate well the corporate meaning of the Resurrection of Jesus. 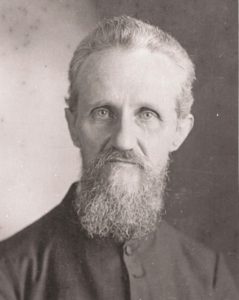 Father Paul Smolikowski, C.R. was a Resurrectionist priest whose life spanned the end of the nineteenth  century and the beginning of the twentieth. His devotion to Christ and the Church was legendary.  Recently, he has been honored by the Congregation for the Causes of Saints, a Vatican office which investigates the claims of those who advocate for Christians who have lived holy lives. The Congregation has determined after detailed investigation that Father Paul lived a life of heroic virtue.  He is now listed among the “Servants of God” and can be called “Venerable.”  The next stage in the process of declaring someone an example for the entire church is in being declared “Blessed.” The final determination whether a Christian can be declared a model for the entire Catholic Church is the declaration that a person like Father Paul was, and is, a saint.

We can now pray to Venerable Paul Smolikowski, asking him to intercede for us before the throne of God. Should a healing occur as a result of prayer for his intercession, documentation can be introduced to the Congregation asking that an official miracle be declared. If the documentation proves that the acclaimed healing is actually a special intervention of God, then a candidate can be declared a “Blessed.” Should a second miracle be certified, the candidate can then be declared a saint of the church. it sounds like a simple process but it’s not. The Church is deliberate and thorough in its investigation of purported miracles. The documentation for an alleged miracle must include the following:

If through the intercession of Venerable Paul, someone is cured completely and instantaneously of a fatal disease, he could be declared among the “Blesseds” of the Church. What that means is that his name can be used in public worship and a special Liturgy of the Eucharist may be prepared with prayers addressed to the Lord through the intercession of the Blessed. We pray that Father Paul Smolikowski, one of the heroic members of the Resurrectionists, may be raised to the honors of the altar.

The Chicago and Joliet Resurrectionists have taken the cause of Father Paul to heart. His intercession is being sought for special blessings for the people we serve in our parishes.