President Trump is threatening to close the border between Mexico and the U.S.  This is another attempt by Trump to convince us that an invasion of drug dealers, gangbangers, rapists and criminals is occurring at the border. Like everything else he says, he makes it up. He caters to a base group of supporters who stick with him when they see him standing up for America.  To hell with those people who are coming over the border to take our jobs away.  To take our women. To birth their babies here. To parasitize our culture and burden our health care system. Keep ’em out!

Here is a guy who doesn’t know what it means to live in poverty, or worse, to live in fear for your life. Trump knows about business and how to get what he wants.  He knows how to double-down on derision for Central Americans and Mexicans so he treats people who are refugees from violence and destitution as if they are a criminal wave threatening to engulf America.

What he and his element have created is an enemy. He needs an enemy to maintain a “we” and “them” illusion. We definitely are not them.  They are criminals and distasteful in so many ways so lets keep them out and us in. Doesn’t that make you proud to be an American?

For most of us Americans, our country welcomed our immigrant ancestors, or, at least allowed them in. Poles, Irish, Germans and others came for a little piece of the American dream.  They came through an open door monitored by immigration agents. Then, these immigrants had to work and work hard to make a place for their families. As they settled in they also gave us all St. Patrick, pizza, hot dogs, and yes, apple pie.  They gave us artists and craftsmen along with a workforce that made us a giant among nations. The diversity of immigrants continues to enrich our culture.

If Trump closes the border, Mexico will likely close its border, too. There are two doors at the border and Mexicans hate to be disrespected or pushed around. An imperialistic attitude of the US is not much tolerated south of the border.  American goods may not find their way into Mexico and American tourists, used to taking a cheap vacation next door may find that door slammed shut.

Tomorrow is the first day of Spring and here I am looking out this Sunday morning on a fresh cottony world of white snow. The last gasp –I hope– of winter came this morning just before 5 AM when I was making a cup of coffee and thinking about travelling sixty miles to visit my sisters. Here it is 10 AM and the sun is shining courageously, it’s warmth already beginning to melt the two inch covering of snow. 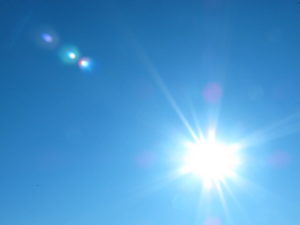 next to the church parking lot and watched as the parishioners of Immaculate Conception Church trudged faithfully through the snow to Mass at 7 AM and 9 AM. No adverse weather keeps these people away from prayer and the reception of Holy Communion. And today, this seventeenth day of March is also St. Patrick’s Day. Another reason to show up on Sunday with a green sweater or shirt, even some with green ties.

I can’t risk the slippery situation out there so I attend Mass through T.V. (Channel 9) and postpone this morning’s visit to my sisters. My prayers for them and the entire Church have already made it through my heart and I hope up to the throne of all graces.  “This is the day the Lord has made. Let us rejoice and be glad in it!”  (Ps 118:23, NAS) 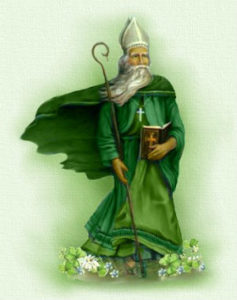 The Plumber’s Union  of Chicago just dyed the Chicago River emerald green. I say “emerald” because the sun reflecting off the surface of the river makes the river shimmer.  Emeralds shimmer, too, when the sun catches their facets. “Green” alone doesn’t do it for me.

Does it seem kind of funny that of all the groups available to dye the river, it is the guys who work on broken water pipes and stopped up toilets that get to gussy-up the a waterway which snakes mostly from East to West across Chicago?  Why not the firemen who extinguish fires all year round in the “City that Works” or even the college of alderman of the “Windy City?”

Maybe the answer lies in the history of the event.  It’s the day of the St. Patrick’s Day Parade when the Chicago River becomes spectacularly green. Could be that the plumbers union of the “City of Big Shoulders” at one time featured Irishmen who took it upon themselves to paint an unpaintable canvas of moving water the color of the “Old Sod” and that it has been so forever since? I’m not willing to look it up.  I want to believe that it’s so.

I wonder if St. Patrick had a sense of humor.  I know he was serious about the conversion of the barbaric tribes that populated the Irish island fifteen-hundred years ago.  But I think that any man who could write the “Breast-Plate” prayer that begins “Christ above me,  Christ below me” would also have a sensibility wide enough to include the stout men who, with a twinkle in their eyes and smiles on their lips, today float on a river glittering green because they wanted it so.

“Marguerite,” a 2015 film, tells the story of  a wealthy French baroness who is obsessed with the beauty of opera. She also thinks she can sing.   In fact, she is tone deaf.  But sing she does anyway.  She knows all the famous operas and has costumes and scenery to match. But when she opens her mouth what comes out is off-key and loud, with some efforts reaching screeching proportions.  She cannot hear what she sounds like.  I know that’s hard to believe. But, have you ever heard a recording of your own voice? Your first response might be surprise: “That’s not me.” Yes, it is you — for better or worse.

She becomes a generous benefactor to local charities and she often invites rich friends to come to benefit concerts held in the great hall of her exquisite mansion. The guests make significant donations and sit through awful solos by Lady Marguerite.

Everyone in my family sang.  When I entered the seminary I sang with the other seminarians. An amateur promoter came to the seminary with very fine recording equipment. We were singing Gregorian chant and some new English psalmody. I was asked to solo on Psalm 23. When the tape was played  back, I sounded fine, even beautiful. I was stunned. I had never heard my voice before.

I used to think that I came from a celebrated city, Chicago, and I was proud to register at hotels overseas and list Chicago as my home-town… that is, until I noted the reactions of hotel clerks.

One hotel manager in Florence suddenly lifted his arms as if he were holding a “Tommy Gun” and sprayed the foyer with air-bullets, all the while chanting “AL CA-PON-E, AL CA-PON-E.” At A fine hotel in Acapulco, the very proper desk clerk simply lifted his eyebrows and rolled his eyes as he contemplated “Chicago.”

In the film Lady Marguerite was given the opportunity to record an aria.  She was delighted. But, when she heard her own voice, she swooned and died in her husband’s arms.

May we be granted the humilty to see ourselves as others see us before we die of embarrassment.