A kettle of vultures soared over me as I sat reading at a picnic bench in a local park dotted with leafy-green oaks and spacious grassy areas.  Several birds were low enough for me to see their black –not red–heads. Turkey vultures have black heads as juveniles so I am not sure whether I saw an actual grouping of Black Vultures or a family with juveniles of the Turkey Vulture species.

I thought I should move a bit so they don’t mistake me for breakfast. So, I got up and changed sides at the picnic table. They soared ever-circling, looping…looping, their slightly “V” forms rising on air currents with rarely a flap of their wings. 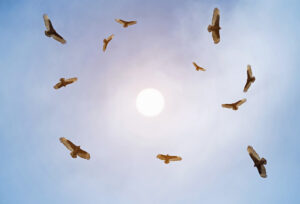 Black vultures are more common in Southern States and like their Turkey Vulture cousins feed on carrion.  They are efficient carrion processors but they can also attack a weak animal as cattle and sheep farmers in Kentucky can attest. A dozen or more Black Vultures can make quick work of a sick or injured calf. Turkey vultures are more courteous and attend to a meal only after their host dies.

I remember that once while standing in the shadows the Bernini’s columns of St. Peter’s  in Vatican square, I watched a passel of sea gulls attack a  pigeon and rip it to shreds in broad daylight. In a few minutes only bloody feathers remained.

Somehow, I felt embarrassed that the gulls of St. Peter  were not holier. No! In front of God Himself and pilgrims from all parts of our world, they simply pecked and tore apart the bird that represents peace.

So, I respect birds.  Some will defend their nests by diving at the intruder.  Just try to get close to a red-winged blackbird’s nest.  Others like gulls will coyly surveille the weaknesses of other birds and kill them for food.  And, vultures daily check-out an old guy sitting on a bench by himself under an aged oak.  They eventually move on, waiting for tomorrow.

The summer birds are gone: the warblers, fly catchers, orioles and goldfinches have all flown away along with most of the ducks. We do have some remainders, though. During the last one hundred years, the cardinals and robins have learned to stay here in the upper Midwest and endure the harsh winters. So, they stay and make me pay attention to them during my morning walks.

We had a strong frost this am but a few mallards float defiantly in the bright sunlight on the ponds that I frequent .Canada geese waddle around on land, determined to pass the winter with us, too. There is not an abundance of food but somehow these winter residents eake out a living.

Yes, the crows are crowing and the Blue Jays seem always to be scolding. The chickadees flutter around close to me and hang on the bark on the sides of trees.

The snow birds (Juncos) haven’t arrived yet but soon flocks of them will liven up the scrub bushes and barren paths.

Summer is dying and the bushes are losing more leaves with every breeze. But, the birds are still here. And, so I will get up in the morning and see what they are up to.