The little Church of San Anastasio on Via Balbuina between the Piazza D’ Espana and the Piazza del Populo is not only the church for Greek speaking community of the Byzantine rite but also serves as the church of the eparchy of the Hungarian Comnmunity in Rome. The bulletin was in Greek, Hungarian and Italian!

The liturgy was beautiful with the eparch processing in after the three processional crosses, icons and all assisting priests had entered the sanctuary.  The choir of mostly seminarians and young priests sang in reverent harmony as the solemn Eucharist continued.  Soon we were all enveloped in whispy clouds of incense which perfumed the air and lifted our spirits toward the presence of God. “Holy, Holy, Holy,” chanted the deacon as the bishop celebrant bowed profoundly to the altar, now flanked by solemn icons on pedestals.

I must admit I got lost in the ritual at times but the focus on worshiping God in his majesty touched me even though it was all Greek to me (sorry). There are so many ways of being Catholic, so many Catholic expressions of liturgy. Here I was a Latin Rite Catholic sharing with my brothers and sisters in a Catholic Oriental rite. Then, of course, sharing Holy Communion with them, one with them at the altar, one with them in spirit and body.

St. Anastasio’s is close to the generalate of my Community so after the Mass the three of us walked over to the Piazza D’Spagna to share in Sunday dinner with the priests and seminarians of my religious community.  The community of  fifteen members includes two Brazilians, one German , one Canadian, nine Poles and two Americans. We had a great dinner with these men and also sang Happy Birthday to one of the nuns associated with the generalate (There are three sisters residing there.)

Communion with St. Anastasio Eastern Rite community and then my Congregation’s Sunday Dinner.  We three were blessed with two communions with two different communities on the same day. What a Sunday! 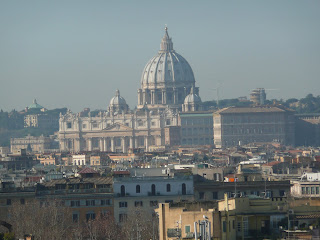 At 6 PM tonight, at dusk, there was a tremendous bang and then twenty or thirty explosions in a row.  I lost count. Then, I recognized the noise as fireworks. It sounded like it was coming from the Vatican, just down the hill from the North American College where I am staying. Now, the cracks and booms were overlapping one another and I was sure it was fireworks.

I joined some of the seminarians and  members of my sabbatical group who were out on the roof watching the spectacular  entertainment. There were bursts of red stars, then soaring blue flashes, then waterfalls of yellow light, so close that I felt I could reach out and touch them. I could sure hear them –popping and roaring, shattering the Roman evening with each burst of flashing colored lights.

What a wonderful show and it went on for at least twenty minutes.  It was the celebration of the 81st anniversary of the establishment of the Vatican City State. In 1929, Mussolini representing the Italian government and Pius IX, through his secretary of state, signed the Lateran Treaty, thereby ending the half-century of “prisoner in the Vatican” status that the popes had endured since Italian unification.

Apparently few here expected today’s noisy celebration. There was seemingly little advance warning. Just like everything else in Rome, it happens and if you are there for it, fine. If not, it can’t be helped. It’s the Roman way.

I have to keep remembering that the Vatican complex is a separate state and not only the central showpiece of the Catholic Church.  For one, the Vatican is a full member of the United Nations but, by its own decision does not vote. The Vatican’s delegate can address the UN or respond to issues other nations have addressed which concern the world, like Global Warming. Also, most nations of the world exchang diplomatic relations with the Holy See, which represents the Vatican. When a display like today occurs, it’s a reminder that the tiny state is, nonetheless, independent and important.

Earlier today, I participated in a Papal Mass in St. Peter’s Basilica. The crowds overflowed the basilica on this World Day of Prayer for the Sick.  Thousands of medical workers, including doctors, nurses, technicians
and the sick themselves attended this annual Mass.

It was hard not to notice the Vatican police guarding the entire area inside and outside of the basilica.
Some wear dark suits with emblems of St. Peters on their coats, others wear the uniforms of the Vatican City Police and look like Chicago patrolmen without the guns. And, of course, the Swiss Guards in their orange and black striped archaic uniforms with bright red plumed hats are posted at strategic areas inside and outside of St. Peter’s. Besides being a religious center, the Vatican is clearly a state. By the way, yes, it does have a jail.

What a day this has been for the Vatican! The entire day dedicated to praying for the sick and those who are dedicated to their care. And, just when you think it’s time to go home, the Vatican celebrates its anniversary
and pops a thousand champagne bottles in a spectacular evening light show.

I just walked back from St. Peter’s Square here in Rome. On my walk, I was thinking about what the presence of Jesus in my life has meant to me. He has made all the difference. I can’t imagine not being a Resurrectionist, both preacher and teacher of the gospel of hope.

Sometimes, of course, I wonder what it would have been like to have my own family. Would I have been a good husband and a decent father? Could I have loved enough or would I have made a mess of things.
If I preach a lousy sermon on a poarticular Sunday, the following week I can do better. You can’t do that with kids, throw one away because you didn’t make it right.

My present vocation is the right thing for me. I still feel the fire.The presence of Jesus in my life still shakes me up. His message still moves my heart.

Today I am  thinking about  when Jesus announced: “I have come to bring a fire upon the earth and I am anxious to see the fire kindled.”

Another translation has the text like this: “I HAVE COME TO THROW FIRE UPON THE EARTH.” I’d like to throw some of that fire around and get resurrecting life moving among the people serve.  It’s that same fire which appeared over the heads of the apostles at Pentecost. It is the Risen Jesus who sends His Spirit to us to remake our lives, to remake this earth..

Come, Holy Spirit, fill the hearts of your faithful people and enkindle within them the fire of your divine love.