First of all, it’s Holy Week in Rome. A million visitors have arrived in the Eternal City. The streets are full of teenagers, college students, and pilgrims from everywhere.

What can I say? The whole city is full of life and excitement.  The liturgical celebrations are beautiful and take place all over Rome.  Hundreds of churches offer the entire series of Masses and services of Holy Week. Everyone comes to them, Catholics and non-Catholics

I will join hundreds of priests tomorrow for the Chrism Mass of Holy Thursday morning in St. Peter’s Basilica with the Holy Father presiding. The holy oils consecrated at that Mass will be used for anointing the sick, blessing of catecumens and anointing of new priests at ordinations.

On Friday, I will distributing Holy Communion at the Good Friday Service in St. Peter’s.

Holy Saturday and Easter I will join other services in local churches where the Masses are not so crowded as a St. Peter’s.

It’s the eve of the Sacred Triduum. You can almost feel the entire Church here in Rome take a deep breath as the holy days begin.

The Church needs prayer at this critical time but so does the entire world. It is time to repent of our sin and embrace the grace of Jesus Resurrected. The whole of human society needs the grace of Jesus Christto bring the birth of a new kingdom into our tired and waiting world. 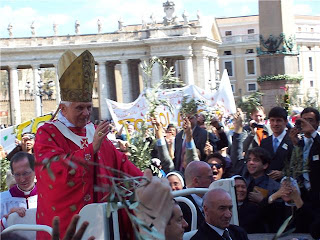 It’s hard to know the exact figure but there must have been 50,000 people in and around St. Peter’s Square this Palm Sunday morning. The day was full of light as just a few white clouds passed through a blue heaven on their way somewhere else. For the people of God below, the sun shone brightly with enough warmth to make the day perfect.

We were outside for this Palm Sunday Mass. Benedict XVI was celebrant and cardinals, bishops and priests from throughout the world joined him.

I was up on the platform (for want of a better word) with the pope and the prelates as one of  two hundred priests who were to distribute Holy Communion. Among my other thoughts was this: What am I doing up here with all these important people? Soon one of the Swiss Guards will come up to me, point his spear at me and ask me to go down to my proper place in the crowd.

The Holy Father in brilliant red vestments spoke of Palm Sunday as a new vista from which we should look to the two Jerusalems: the Holy City of God which some day will come down from heaven beautiful as a bride prepared for her husband; and the city of man where the kingdom is being planted now in our own day.

The Mass was nearly three hours long but semed much shorter. The music was touching, especially the tonalities used during the singing of the passion.

The pope looked spry and happy today. He spoke of the joy of being a Christian and referred to the Glory of Christmas when the angels sang of the glory of God. We should have that joy even now as we enter Holy Week, he said. The passion of Our Lord will lead to the joy of the Resurrection. We should console ourselves with this certainty.

Joy was clearly shown in the square today as the popemobile passed slowly through the crowds after the Mass. Today was a special celebration for youth. The young people from all over Europe waved their olive branches and palms and shouted “Viva Papa” while the pope himself smiled and waved enthusiastically.

Pope Benedict XVI announced today in Rome that this Friday, March 19, he will sign a pastoral letter addressed to the Irish people on the problem of clerical sex abuse in Ireland.

Those of us present today at the Wednesday general audience were surprised that the pope would use this informal occasion to make his announcement concerning clerical sexual abuse in Ireland. Usually, Pope Benedict is more attuned to the festive nature of these audiences. However, it is St. Patrick’s Day, a day the Irish people hold dear and the pope made it clear that he wants to respond quickly and firmly to the issue of clerical sex abuse in Ireland.

Under a bright blue sky and a brilliant sun, the pope seemed inspired as he began to speak of the love of God in the traditions of St. Thomas, St. Bonaventure and St. Francis of Assisi. The huge crowd gathered in St. Peter’s Square was excited and attentive to the words of the Holy Father. After urging the faithful on to greater love in several languages, including French, Italian and Spanish, he changed course when he began the English text of his talk.

As I sat on the raised platform just yards from the Holy Father with other pilgrims and visitors to Rome, I noted how joyous the scene was as various parish and university groups were announced in their own languages.

When the pope began to refer to clerical sexual abuse in Ireland, the crowd hushed and became somber. It was clear that the pope was using this public occasion to announce his pastoral letter on clerical sexual abuse in Ireland to underscore his determination not to sweep this issue under an ecclesiastical rug. Even the non-English speaking visitors seemed to sense the gravity in the pope’s voice.

The pastoral letter on clerical sexual abuse in Ireland will be signed by the pope on his name’s day this Friday, the Feast of St. Joseph and a national holiday in Italy. St. Joseph, the foster-father of Jesus is held up as an example of purity. He is often invoked as St. Joseph, the Chaste.

Though the pope will sign it on Friday, the letter on clerical sexual abuse in Ireland will be issued sometime after the signing, perhaps next week.

After announcing his letter on clerical sexual abuse in Ireland the pope said: “Read it for yourself with an open heart and in a spirit of faith. My hope is that it will help in the process of repentance, healing and renewal.”

Ninety-two stairs. That’s how many stairs I have to climb these days to get back to my room after class at the Pontifical North American College, sometimes two and three times a day. I am so grateful I can do it. A year ago, at this time I could not walk up twenty stairs without nearly collapsing. But, now that my pacemaker is pacing correctly, I’m fine.

It’s a kind of resurrection for me, this ability to walk to events without having to think if I can make it or not.
It would be painful to be in Rome and unable to walk to the most beautiful churches in the world.

I am ten minutes away from the main altar of St. Peter’s Basilica. Today, I was there again for morning Mass at 9 AM. Sixty-feet above the huge altar at the end of the vast expanse of St. Peter’s, sunlight was brightening the stained-glass image of the white dove on its golden yellow background as people of different colors and languages gathered for the regular Sunday Mass. And, I thought of the Holy Spirit shining down on the Church –the same spirit that hovered over the waters at creation.

God’s Holy Spirit makes us one body in Christ and joins us together as temples, temples of the Holy Spirit.
I thank God that today, on the day of the week that recalls the Resurrection of Jesus, I was able to walk up the stairs of his holy temple here in Rome, enter His magnificent sanctuary and join his people in praise and thanksgiving. It’s Lent so I can’t use the exclamation here that I want to use but it rhymes with “so here’s to ya!” “A– — –!.”