A friend of many years died this morning.  I knew this was coming but now that that day is here, I am numb.  No tears have  come yet nor anger at how abrupt death can be. I’m just going to let the sweep of ritual and relationships have it’s way with me because, though I feel diminishment, al le John Donne, Mike’s death is not about me.

He and I did, however, talk about his end-stage liver disease and he knew he would not live long.   He said he was not afraid to die but was anxious about the process.  Would it be painful? Protracted? Could he suffer through it if necessary. Then he stopped, thought for a moment and  then suggested a hymn for his funeral, “Abide with Me.”

That hymn is an old Protestant favorite by Henry F. Lyte.  It’s a prayer that a Christian might pray as he faces death. In the Gospel of Luke, two disciples, discouraged and saddened by the death of Jesus, take the road back home after the crucifixion. A stranger walks with them, explains why the messiah had to suffer and die.  Once they arrive at their village the two disciples, now enlightened by grace,  entreat the stranger to “stay with us” or “abide with us.”

“Abide with me; fast falls the eventide;

The darkness deepens, Lord with me abide.

When other helpers fail and comforts flee,

Help of the helpless, abide with me.”

It’s a hymn of confidence that the Lord would hear the soul’s prayer which reflects that “I need Thy presence every passing hour, that with His presence “I fear no foe…Where is death’s sting? I triumph still if Thou abide with Me.”

Mike was a Resurrectionist, a religious of the Congregation of the Resurrection. He lived in the hope of the resurrection every day. “Abide with me” presumes that like the two disciples on the road to Emmaus  we, too, will come to that place where we find Jesus alive and beckoning us to come.

“Hold Thou Thy cross before my closing eyes;

Shine through the gloom and point me to the skies;

Mike Danek died on the thirty-fifth anniversary of the day he became a religious. At that time, he vowed community life and confidence in the Lord in the Congregation of the Resurrection.

There were forty-five people at the 7 am Mass today.  I counted.  Most of these faithful people are at daily Mass.  The majority are seniors, but there are several thirty-something men and women who also show up.  They come because the Mass is beautiful, enriching and unchanging in its essentials throughout the centuries –at least. this is why I think that they come..

Over there, kneeling, is an eighty-one year old man whose wife left him two years ago.  They had been married over twenty-five years.  His wonderfully strong voice rings out when he is lector at Mass, as he was this morning. He’s here most mornings to pray with us.

Coming up to me after Mass is the white-haired lady who introduces  herself as the mother of the woman who died a year ago and for whom today’s Mass was especially offered.  She has some difficulty keeping here composure when she talks to me of her daughter. This Mass meant very much to her.  Then, there is the father who brings his two grade school sons to church most days.  They sit at the left of the altar in the 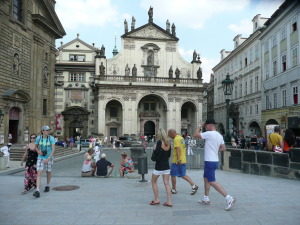 middle of the church.

All of these people come to the Eucharist for blessing, for grace and yes, for communion with the rest of those who got up this morning to pray.   Where else could they go this morning when God calls them? 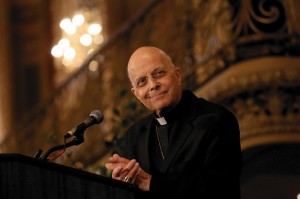 Cardinal Francis George, archbishop of Chicago was buried last week after a long and dedicated ministry.  A member of the Oblates of Mary Immaculate, George had visited Oblate missions throughout the world in his official capacity as part of the Oblates central administration in Rome, all of this, of course, before he began his episcopal ministry.

One thing about his preaching and admonishing (He was known by some as “Francis the Corrector.”) has remained with me: his powerful prophetic voice.  Preaching to a packed church at the one hundredth anniversary of a landmark Chicago parish, he began by congratulating the parishioners and asking God’s blessings on their wonderful ministry. It was nearing Christmas so he continued with his sermon by reminding everyone that the birth of the Savior was immanent. Then, it happened, like I have heard it happen in other talks and sermons by the Cardinal. He looked around the enormous, beautiful church with its glorious art and without changing his tone or cadence, said, “Of course this will all come down in the coming conflagration.”  Then, he picked up his Christmas theme and beautifully concluded the centennial sermon.

Another time, he was speaking about economic matters to about eight hundred pastors and their associates.  He encouraged simplicity and responsibility in paying off ecclesial debt. Then, again without changing his demeanor or lifting his voice, he predicted the collapse of the Church’s economy along with the American dollar. He continued on with a very nice talk on fiscal responsibility.

He threw a similar grenade into most of his public speaking.  Most people, I think, were disconcerted by these prophetic digressions. At first, the grenades confused me, too.

Cardinal George left us the promise, not of peace but of end-time conflict .  The battle is with secularism in society and in the Church.  He was a fighter for the gospel of Jesus Christ against a militant secularism. He did die in bed. I wonder what Archbishop Supich is thinking about these days.