The book, “If Christ Came to Chicago” was issued just after the 1893 Chicago World’s Fair. It was a British reporter’s view of the city behind the World’s Fair –and what he saw wasn’t pretty. “The City that Works” was a city of graft, corruption and disdain for the poor.

Like a phoenix, Chicago had risen from the ashes of the 1871 great fire. It had rebuilt by pulling itself up by its boot-straps.   Chicagoans had shown, the nation and the world what incredible stuff they were made of.  But, “If Christ Came to Chicago,” written by William Stead, a top investigative  journalist, showed the dirt behind the White City. It revealed a poverty that stretched from the bawdy center of Chicago through the neighborhoods jam-packed with recent Polish, Italian and German immigrants and to the day-laborers who gathered on street corners and vacant lots each morning hoping someone would hire them.,

William Stead was particulaly adept at seeing behind the images of the “White City” and into the grimy facades of Chicago’s beery streets.  He knew that the developed and mature New York City culture considered Chicago the far west, a place a man could go to have a little adult fun, where a guy could go to let off some steam in its brothels, beer halls and honkey-tonks.  Let’s admit it, Chicago was the Las Vegas of the day. What happened in Chicago, stayed in Chicago, sort of….

This was the muckraker era and Swift’s meat processing plant and other dirty industries were being exposed by energetic reporters.  Americans ate this stuff up.  These books were written as if what was being revealed was all confidential. Stead, though less sensationalistic than the muckraker crowd was particularly good at contrasting Chicago’s lowest class with the  affluent owners of factories, processing plants and the churches built by the grand churchmen of the day.

Stead looked for evidence of the presence of Jesus, the Christ in the Windy City. He didn’t find much concern for the poor among Christian churches.  He found that during the recession of 1893, it was the drinking establishments that took care of the poor. A free lunch went with a three cent beer. People were hungry and were fed even though they did not have the three cents. Where were the churches? They were happily organizing, hiring staff, building new schools, erecting new places of worship and generally busy with a huge infux of immigrants, many from eastern Europe. There were entry level manufacturing jobs that paid slave wages to immigrants, barely enough for an apartment and not enough to feed their kids.  People went to church of on Sundays where in the Catholic churc the Masses were in Latin but the sermons were preached in their native tongue.  However, you wouldn’t have found the members of the established churches ministering to those suffering from the depression. There was little evidence of soup kitchens at those churches, although some parishes had established day-care centers and credit unions.

People were hungry during the 1893 depression. How could it be that the city could construct a world’s fair but did not have enough jobs to hire these immigrant laborers? I guess there were just too many of them.

It’s 2018 now and I am still waiting for the resurrection of the city by the lake.  We don’t need more elegant buildings, more spacious parkways. We do need to see Christ in the faces of the poor huddled among us on frigid, windy mornings in Chicago’s early Spring.  Maybe if we see His face in them, we might not turn away ignorant of His presence.

“A word is dead when it is said, some say.  I say it just begins to live that day.” Emily Dickinson

Ain’t it the truth!  Beautiful words, especially words that capture heart or color or passion endure.  Words like “honey” (the bee kind); “Daydream”, not a night dream but the bible’s promise: “Your young men shall see visions and your old men dream dreams.” (Joel 2:28)  Words like “crimson and ebony”  fashion colors in the imagination that push the limits of “black” or “red.”

What about verbs? Take, for example, the statement “I was enthralled.”  It makes me want to ask, enthralled by what? By whom? Read any of the great writers –Hemingway, Mark Twain and John Updike come to mind–and you’ll find that the energy in their writings comes from their” use of powerful verbs.   Gerard Manley Hopkins, the nineteenth century poet, used verbs and verb forms that jump up at you when his words are spoken out-loud:

“The world is charged with the grandeur of God.
It will flame out, like shining from shook foil;
It gathers to a greatness, like the ooze of oil
Crushed….” (The first lines of “God’s Grandeur.)

A word lives on  when it is heard, remembered and spoken again, repeated by the listener. Emily wanted us to know that.

Incidentally, I still think three words make up the most powerful statement in language: I love you. When the whole sentence is spoken with passion and truth, there is no more powerful moment in the life of the listener than hearing those words. There is no emptiness like those words being spoken to deceive the listener.

Or, as Mr. Rogers might say: “It’s you I like.” By the way, isn’t that a strange way to say “I like you?”  Is Mr. Rogers emphasizing that although there a lot of kids out there, he is choosing me to like?” Words are alive.

I’ve never had a dog.  I mean my own dog. We had a dog in the house when I was a kid, but I didn’t have any relationship with it.  Miko was my sisters’ dog. One day, in Miko’s thirteenth year, my mother left the front door of our house open for a minute while she went to do something and Miko took off.  We never saw him again, though someone told us that a grey poodle had been hit by a car a few blocks away.  That dog had died.

I actually would like to have a dog. I’d like to have it as a companion but not as a house mate.  I think dogs belong outside with space to run and expanse to explore — like on a farm.

My Uncle Bill, who had lost most of his fingers on both hands to a stalled though running corn-picker used to have a farm dog which he called “Dog.” The chief job of the otherwise lazy dog was to go when my uncle said “Go!” The milk cows would be grazing high up a hill next to a fence several acres away.  Dog and Uncle Bill would be idling by a lower fence at about 4 PM when my uncle would casually turn to Dog and say in an even tone,”Go!” Dog would race at full speed across and up the hill and nip at the legs and hooves of the cows, rounding them up and bringing them down for afternoon milking.  I should mention that, Dog was also used to gather the cows for morning milking.

Aunt Gen fed Dog once a day.  That was the only relationship she had to Dog and Uncle Bill saw Dog at milking time. That didn’t seem to bother Dog who had his own stuff to do each day. He was part collie and part everything else and looked just like the brown and white knee high dogs you see at any farm.

If I had a dog, I’d like him to have his own schedule, a private dog-house and a yard big enough to make him happy. I might sit outside with him once a day and tell him about life for as long as he would care to hear about it. No cows, though. 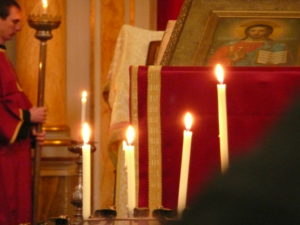 I wish I understood the symbols young people use today to show respect or passion or interest. When all the 17 members of the Florida hockey team dyed their hair blond in memory of a teammate who was one of those massacred recently at their school, I still don’t know what to make of it.  Certainly, the core of their action must be:  We remember you, we remember you together.

When people gather at the site where a friend or relative died tragically and hold candles or release nitrogen-filled balloons which they all let go at the same time, what does it all mean?  Is that ritual coming-together a sign that the person is fondly remembered?  Or, simply that the people who come are in solidarity mourning together?  These demonstrations replace religious rituals of song and prayer which, I guess, to most people are irrelevant in a progressive culture like ours.

By the way when did schools stop asking ministers of religion to come and comfort people after a tragedy, to pray with them, to listen to them?  Now they pay grief counsellors to do the job.  The process is all very efficient and structured to provide acceptable outcomes. Children (or adults) will feel understood and comforted. Who knows what inappropriate thing a minister of religion might feel moved to say?  I guess all that religious stuff belongs only in a church these days and official  religious persons are no longer welcome at public tragedies.

The last time I tried to help in a crisis, someone had phoned the rectory to let us know that person had jumped in front of a train, was dead and that I should go over there to see if we could help.  This happened in a Chicago suburb.   When I arrived dressed in my clergyman outfit, the officer at the area said: “Who called you to come and help?  My answer was “I don’t know, for sure.” Someone else had taken the message.  I thought  maybe someone in the deceased’s  family had asked for a priest.  Or, more likely, I thought, someone from the sheriff’s office who was at the scene called had called me.  “I am just responding to the request,” I said.   The officer was firm: “You’ll have to leave if no one with authority called you here.”  He was not nice about it.  I guess he thought why would a minister be called at all?

Who knows what the remains looked like but the officer was grim as if he had seen the whole thing and he had no use for a minister of religion who could do nothing but pray.

Two weeks later after the 7 PM Mass that Sunday a tearful middle-aged woman came up to me and told me that it was her son who had walked onto the tracks as the train approached. Deliberate suicide.  She had approached me after Mass to ask me for prayers for her and her family and her son.  My first reaction was to hug her and offer my condolences.  I know for sure that that was the proper place to pray with her and to hug her.  And, I did both.

These days, prayers are  pretty much restricted to a church building. So, are ministers of religion.  But, doesn’t it seem sad that at a tragedy the absence of clergy and the omission of prayers is now  replaced with a secular coming-together in remembrance with multi-colored balloons released, lit candles glowing and memorial T-shirts prominent?  This is a new kind of ritual. I guess the secular rituals are spiritual but not religious and, therefore, acceptable to all.