Indigenous peoples of Central America had high regard for the elegant Quetzal whose graceful long back feathers reach down its back forming what looks like a wonderfully long tail. The species is colorful and has a distinctive song which is easy to hear in the cloud forest of Costa Rica. Hearing it is one thing, seeing it, another. The bird may not be rare but it sure is elusive. 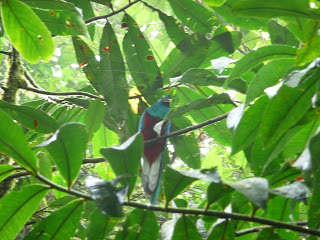 I’ll bet birders (Those who work on tallying a life lists of birds they have seen.) come from all over, and pay a lot of cash just hoping to see one of these legendary birds.

Recently, I spent nearly two weeks in the Monteverde region of Costa Rica and was fortunate enough to see two individuals at two different sites. One was a male, the other a female. Most people only have two or three days to wander the cloud forest. I was lucky enough to have had much more time plus a guide who led me to a nesting area. On my own, I would never have discovered this wonderful bird.

The foliage was dense and it was misty but my photo gives you some idea of the beauty of this bird.

Aztec rulers wore Quetzal feathers in their headdresses and appeared before their people arrayed in the dramatic plumage of  this marvelous bird.

The Aztec chief god was Quetzalcoatl,a who sometimes was illustrated as a feathered serpent.  The feathers, of course, were from Quetzals.

It is an amazing thing that this bird has survived and still lives in the forests of Costa Rica and other Central American countries. I am blessed to have seen and heard them.