Could he be praying for his Church?

Why are there no young men asking to join the Congregation of the Resurrection? We have had a few older men join us in the last decade but that’s it. Our province has lost 2/3rds of its members in the last 25 years and these members are not being replaced. Other religious communities, both men and women, are faced with the same problem.

We’ve been aware of this condition for a long time.  A parade of vocation directors and animators has bitten the dust and we are still looking for the tactic that will bless our recruitment efforts.  We have sent two or three men to represent our charism at national conventions where college-age young men attend. It’s exciting to see them stop to visit our booth but then that’s pretty much the end of the relationship. Why?

I didn’t join my religious community because I was recruited but because I saw men serving Our Lord in ministry and wanted the joy and commitment that they had.  That was yesterday. Why aren’t men coming to us today?  Is it because a vocation to the priesthood is not attractive to young men today?  I was attracted to the priesthood because I wanted to be closer to God and it was the priest presiding at the Eucharist that grabbed me by the soul.

The second reason that we as a religious community are not attracting new members is that we really don’t work together much anymore.  There is no reality to the idea that individuals going off to work in the morning to serve in schools or parishes or hospitals equals community ministry just as there is little to commend the practice of praying public prayer alone, though it is sometimes necessary. Individual apostolates lead to divisions in community life and in the heart of he who serves.

If you don’t need a team to accomplish a ministry then it simply is not  community ministry.  One tradesman cannot build a house alone.  You need an architect, carpenters, masons, electricians, plumbers. masons and others to look at the bluprints and then following that plan, construct a building. Each trade has its place in the finished product. A new business has to have a business plan, too and that takes cooperating people.

We have individuals who no doubt love the Lord and the charism of the Congregation but they don’t work together or even live together. That’s a fact. One-man parishes and individual apostolates have us working for other organizations.

A third reason: The Catholic Church has moved from being perceived as something sacred to being numbingly pedestrian, and in some cases criminal, especially with priests involved in predatory sex.. Who wants to belong to an outfit of fruitcakes and sleazy sociopaths who prey upon children or dependent adults? Yes, I know: Only a small percentage of priests betray their vocations in that way. But, we’ve hidden these men for so long that we’ve become co-conspirators in these horrors.

A fourth reason: Catholic hospitals, nursing homes and schools now exist as secular organizations with little evidence of the practice of Christianity. I’m not saying these institutions are bad, they just aren’t holy anymore.

Let’s look at Catholic schools, for example.  Often, it’s difficult to tell a Catholic elementary School from a public elementary school, except for an occasional “all school Mass.”

I have been pastor in three parishes, each of which had its own elementary school. Each of the principals of those schools actively worked to separate their purpose from the mission of the parish. I had to let go from two of the schools, two long-time principals and the third should have been fired the first week I was there. In one case, it took me three years to accumulate enough evidence to remove the principal, an individual who had been fired by the pastor who preceded me but had been re-instated because of lack of due process.  Another, put twenty thousand dollars of tuition for safe-keeping under her bed. When I refused to offer her a new contract because of similar behaviors, I was forced to resign.

As pastor, I was not welcome in any of these schools. The school was the territory of the principal, each with a coterie of  secretaries, lunch-room personnel and teachers who upheld the principal’s territory with grim defiance. The mission of the parish of which the school was a part was an article of rejection in the creed of the educators.

In each of these schools, I tried to force the issue of priestly presence in the school.  It didn’t work. I can’t remember a time when I was asked to visit a classroom or engage with the children as pastor, as priest. No, not at any of those three parishes.

I’m not likely to pastor a parish again but I  can tell you I would never take one that had a school. I know other priests who feel the same way.

At one time the USA province of the Congregation of the Resurrection ministered and ran three high schools.  Now, we have none –they really don’t need us anymore.  I say: Let them go. 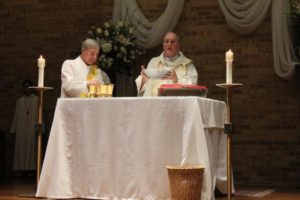 Father Norb, in his ’70s, continues to pastor a large church in Woodridge, IL.

A fifth reason? A priest, especially a religious, has no standing in what Francis calls “the throw-away culture.”  Priests are not respected as revered elders any more. The only position for a priest is as a reactionary and not all men are called to that cross.

Our elders –senior priests included — who are weakened by infirmity and age are told they can live in a pretty warehouse. Each must wear a life-line and refrain from taking a walk because of the possibility of a fall. Food is processed so that it is easily consumed with little chewing.  No one is encouraged to leave their cell unless absolutely necessary.   Two hundred old human beings just expected to maintain themselves until they die.

The throw-away culture lists abortions as the number one subject. Embryos, fetuses, and viable babies are discarded when defective or just not wanted.  Why should some priest interfere in a woman’s right to control her own body?

Many of the immigrants among us are simply a drain on our health-care system and contribute little to our culture.  Send the illegals back and make the legal immigrants abandon  their home country’s culture and embrace the American Way. These are not, of course, my opinions, but I have to listen to these arguments. I counter with “I was a stranger and you took me in.” (MT 25:35)  My religious community was called to America to assist immigrants with everything. We are no longer working with immigrants though the needs are great.  We aren’t seen helping Spanish speaking immigrants so that attraction is not present to young men looking for a challenging life in the priesthood.

So, these days the calling to be a priest in the Catholic Church is hard for a young man to hear.  There is so much noise in our culture against the priesthood that we can’t just turn up the the volume of our vocation work and expect young men to listen and join us.

The Church has gone through droughts before.  We just need to keep building up the kingdom and hope that young men will come.