When Pope Francis was asked recently to answer the question, Who is Jorge Bergoglio?, he answered: “A sinner upon whom the Lord has turned his gaze.”

Pope Francis gave this response in an interview in September, 2013. The interviewer was Antonio Spadaro, S.J. and Pope Francis remarks were published in “La Civitta Cattolica.”

OMG! What modern pope has ever defined himself as, first of all, a sinner? What happens to our conception of the pope as the pre-eminent, holy, follower of Christ? A pope in our day is considered an icon of holiness.  All you have to do is think of John XXIII, Paul VI, John Paul II and Benedict XVI.

Pope Francis wants to shatter the image we might have of him as reigning above us all in holiness. Pope Francis calls to mind the painting by Caravaggio of the “The calling of Matthew.” The masterpiece hangs in the Church of St. Louis of France, in Rome. I saw it when I was in Rome two years ago.

In the painting, Matthew is in what appears to be a pub.  Along with him are several of his henchmen and they are counting the days take. 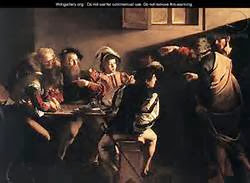 One young man fingers the day’s haul and contemplates it. Jesus, barefoot, enters the pub with Peter.  Jesus points to Matthew and says “Come follow me” as he points at him. Matthew points to himself as if to say, “Are you sure you want me?”

Pope Francis feels he has been chosen through no merit of his own to be an apostle like Matthew.. Pope Francis does not set himself above us but situates himself with the rest of us sinners.

There is a quiet revolution going on in the Catholic Church.  In this fiftieth anniversary year of the opening of the Second Vatican Council, Our Lord has given us as chief shepherd, a sinner in need of the healing call of God’s mercy, just like you and me.

Pope Francis is confident of that mercy and he knows that he is graced with the light of God.  He wants us all to see the light.