For a completely different observance of the season of death and dying, try the approach of Mexicans who each year observe, “ El Dia de los Muertos,” the “Day of the Dead” on  November 2, All Souls Day. 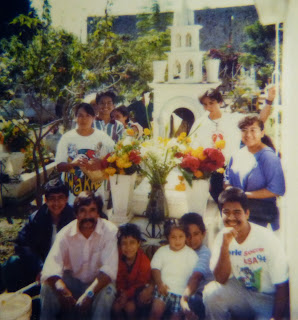 Although some Mexican communities have started to have a kind of Halloween on Oct. 31, Halloween has no cultural roots in Mexico. It is an artificial observance imported from the U.S. The familiar “Trick or treat” custom is foreign to the typical Mexican family who is not going to waste money on costumes.
“The Day of the Dead,” however, is indigenous in origin and Christian in practice. It’s no coincidence that “El Dia de Los Muertos” occurs on November 2, All Souls Day. It’s a sacred day for most Mexicans. Halloween…not so much.
I once joined an observance of “El Dia de Los Muertos” in a cemetery on the outskirts of Oaxaca, in the state of the same name.
By the time I arrived on All Saints Day evening, the city cemetery was already teeming with people who were gathering at their family plots. Children joined their parents and grandparents to observe the customs of the day. No one was dressed in a Halloween costume.
I carefully made my way among the gravesites where family members had erected small altars. Children and youth brought flowers and entire families laid out plates of food for themselves and for the deceased.  At one gravesite, Uncle Jose was remembered by a favorite hat, a cigar and a home-made tamale all laid respectfully on his tomb next to a shotglass of tequila.
It’s dark during the observance of the Day of the Dead, Halloween in Mexico. The only light comes from the flickering candles at each grave which reveal the faces of those who have come to spend the night with their dead. While guitars play softly, each family respects the devotions of their neighbors.
As a non-Mexican I was not uncomfortable with the spirituality of the observance. The idea of recalling that those who have gone before us are still with us seemed right to me. The living had come to share one night by walking among the spirits of the dead in the place where they still lived.
Observing the customs of El Dia de los Muertos is a way of making a friend of death, since we all will have to experience it. It is a solemn observance of the reality of the spirit world.
The entire family stays with the spirits all night, eating and drinking and singing.  If the candle flickering on Tio Pepe’s grave suddenly catches a wisp of air and moves or gets unaccountably brighter or even goes out, that is proof that Tio is there.
The families remain all night with the spirits of their loved ones and do not leave until sunrise.
All Souls day used to be observed by Catholics as a day to bring flowers to the burial sites of loved ones. We prayed there and tended our grave sites out of respect for the memory of those family members who had died.
Our All Souls Day observance is like the Day of the Dead and very unlike Halloween. On All Souls Day, the Day of the Dead, we ought to visit a cemetery and remember that for Christian believers life is changed not ended at death.