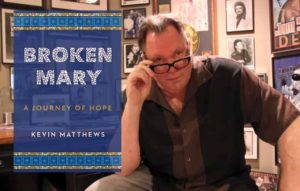 I’ve always thought it strange that there is no moment in official public liturgies of our Church where a believer can stand up and share an experience of God. Now, Kevin Matthews and his “Broken Mary” talk has awakened me to think of another way to give Catholic witness.

Evangelical and pentecostal churches often ask during their services “Can I get a witness?”  Wouldn’t it make our Sunday liturgies more relevant if someone — at least occasionally– could get up after Holy Communion, walk to the lectern and tell the community of a recent experience of the Lord that was life changing?  Let’s hear it for an experience of God!

I can’t think of an instance where this has happened in my fifty years of presiding at the Eucharist. Oh, wait!  I have heard the designated parishioner on Stewardship Sunday speak of how giving ten percent in the weekly collection has changed his/her family’s life for the better.  Something similar sometimes happens at the promotions on the Sunday before Catholic School’s Week.  Typically, a couple stands before the Sunday Mass gathering after the announcements and relates how sending their child to a Catholic School has benefited their family. Maybe these two instances of what I am talking about are not the best examples (because the pastor has contrived a way to urge tithing, for example) but they are genuine heart-felt expressions of how the Lord has touched a family and deepened its experience of religious life.

Recently, I heard an hour of testimony by a former radio celebrity, Kevin Matthews, about his life-changing experience of recovering devotion to Mary, the mother of Jesus. He calls his talk “Broken Mary.” For this non-liturgical event this particular church, in a suburb of Chicago, was full — five or six hundred people.

After we prayed the rosary, Kevin Mathews stepped out in front of the community to talk about his conversion from a nominal Catholic to enthusiastic promoter for devotion to Mary and through her to consecration to her Son. His voice was unmistakable, the same voice most of us had listened to when he was on The Loop AM 1000 in the ’80s and ’90s. His sense of humor was warm and spontaneous. The crowd loved it.

His witness was to tell us his story of conversion. He was fading as a celebrity (as radio was fading as a powerful medium). Diagnosed with a rare form of MS, he soon found himself without work while still raising a family.  A triple whammy: job loss, incurable disease, and fading celebrity status. He was carrying all this on his shoulders when he had a life-changing moment.

As he was exiting his car to buy some flowers at a florist shop outside of a cemetery near Chicago, he noticed a large broken statue of Mary, the mother of Jesus,lying next to a dumpster. The statue was fractured in half just below the waist and Mary’s hands were broken off, too. The grime and grit of exposure at the dumpster clung to the discarded statue. He thought: “Mary is broken. I’m broken, too.”  Thus, the Broken Mary story of Kevin Matthews was born. He rescued the statue brought it home.

The grace of God and the blessing of Mary saved him from the despair he was going though.  He now relates his Broken Mary story to packed churches.  Kevin reminds people to pray the rosary and be proud of being Roman Catholics. It’s his testimony, a personal experience of Jesus through his mother.  “I guess I’m a Jesus freak now,” he said.

After the “Broken Mary” testimony by Kevin Matthews, hundreds of us formed communion-like lines so that we could get up close and personal with this image of the Mother of God in crude concrete. The image is large enough to be placed above an altar but that probably wouldn’t happen because Broken Mary’s repair shows like an ugly, long encircling scar. It is the tender image of Mary of Fatima and Mary, the Immaculate Conception. But she was damaged somehow and her hands are broken off, still missing.  Many of us felt in front of Broken Mary that we were broken, too.

Kevin Matthew’s Broken Mary story was told before a rapt audience of believers. It’s the kind of thing that should happen more often in our Catholic churches. It makes real and challenging the Gospel that we hear about in homilies every Sunday. If we can’t find a place in our liturgies for personal witness, then lets promote more events like “Broken Mary. After all, shouldn’t our brothers and sisters in the Faith be given an opportunity to pour out their fervor for what we all profess each Sunday in the Creed? (Click here to buy Kevin Matthew’s book, “Broken Mary.”)) 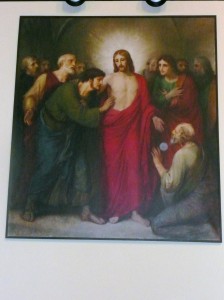 I have touched Him.

The campus of Our Lady of the Lake University in Mundelein, Illinois is where the seminary for the archdiocese of Chicago is located. The road which winds around a lake at the center of the property is a little more than three miles long and studded with beautiful oaks, hickory, maple and stately pine trees.

I was there last week with forty-five other members of my province who were able to be present for our tri-annual meetings called the provincial chapter.

It was good to see old friends and to hear of what’s happening in their lives. Some of them struggle with cancer, addictions, and the complaints of aging. Still, they are a confident and faith filled group trying to maintain focus in an American church wounded by scandal and division.

We Resurrectionists realize that the Catholic Church we serve has been wounded and degraded before by ugly clericalism and debauchery. But, we don’t hide from what needs to be done. We came together to pray for the people we serve and to pray for each other. There was a significant feeling of “were-all-in-this-together.” I saw no discouragement but a readiness to respond to whatever we can still do as Resurrectionists for our American church.

One man stood up at a meeting to testify to the power of Our Lord Jesus in lifting him up out of an addiction. He asked us to consider asking for help if any of us have a similar problem. It is likely that we do and we will remember that man’s powerful witness as an encouragement to do something for the sake of the church and for our own sake.

Sometimes I feel like I’m on the verge of heresy. Like now.  I am not happy when a 4 year old asks “Where is God?” and a confident priest takes the toddler up on the altar and points to the tabernacle and says, “He’s in there.”

I once witnessed a woman who worked at a retreat house, go up to the tabernacle, open it with the key, take the cover off the ciborium and proceed to lecture her seven year old daughter on the presence of Jesus in the sacred bread. “There He is,” she said.

Another time a man in his twenties with access to the eucharist tells me that he held a consecrated host in his hand and said “That’s God?” I watched another priest, during Exposition of the Blessed Sacrament, snatch the monstrance containing the sacred host and march around a parishioner who he felt needed a miracle.

I can hear a chorus of believers saying of course all these people are correct.  I’M  NOT SO SURE.  The proper response to the reserved presence of Jesus in the eucharist is awareness, silence, homage.  The eucharist is not a tool to be used as an ikon of God.  To make it no different than a statue of the sacred Heart or a blessed rosary is to denigrate the sacrament.

Three-quarters of the Catholic world has no reserved eucharist.  Are these people less Catholic because they do not have a priest most days, or are they second class Catholics because they have no tabernacle containing the eucharist? This morning I listened to a Myanmar bishop mention that certain of his villagers up in the mountains are fortunate that a priest gets to the village once a year. Is the living Christ not among them after the priest leaves?

Is it heretical to say that Catholic communities gather to celebrate the presence of Jesus not so that the eucharist can be reserved for adoration but as an act of thanksgiving to God?  At the Eucharist we are there at Calvary with Our Lord as He gives His life for us.  We eat His Flesh and drink His Blood so that we can have life within us, so that we can have Him with us as we return to our secular lives.

The Holy Eucharist is a sacrament, a mystery.  He comes to us under the form of bread and wine. The bread tastes like bread and the wine like wine.  Yes, He is there in substance and when I receive Him He is entirely present to me. But He is not the Eucharist as it appears physically. The Eucharist is properly the action of celebrating and worshipping our Savior, the entire celebration of the Mass.  This said, I love to pray in a church when the Blessed Sacrament is exposed for adoration.  I know He is there as bread, sacred bread and His presence moves me deeply.

As to where is God, what about Jesus telling us that the kingdom of God is within us? And where His kingdom is, He is present.

When a little child (or a big adult) asks “Where is God?”  The first place a priest should point to is the heart of the child and respond, “He’s right there.”