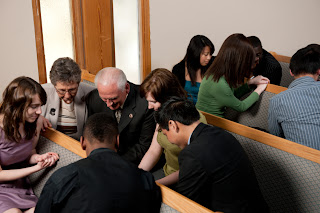 Once he found out I was a Catholic priest, the Belgian businessman sitting next to me on the transatlantic flight was anxious to share with me his experience of Church.

“I grew up Catholic in a small village. My parents were obervant Catholics and we went to Mass on Sundays and practiced devotions like the rosary. When I married, my wife and I went to our village church for Mass but the experience was so unsatisfying that we simply stopped going.  The pastor was cold and formal.  He was not open to spontaneous prayer and distrusted lay involvement in the church. It was only when I met some Catholic charismatics that went to the same churched that I used to attend thst I began to feel more like a Catholic. I am grateful that there are Catholic charismatics in my village.

His name was “Pierpont.” About fifty and soft spoken, he talked with a conviction that impressed me. I like to hear Catholics speak of their faith.  His English was good, but studied, and he often had to search out an English word that would capture what he could have likely said easily in French. He was careful not to be critical of some of the Belgian  priests and bishops whom he felt were not pastoring as they should.

“We Catholics need nourishment for our hearts and not only our heads. We want  to pray freely from our souls. We want to express Jesus in our lives.”  He showed me the book he was reading on contemporary trends in the charismatic movement in the Catholic Church.  He was very aware of the pitfalls of emotionalism and self-activity that can lead to divisions in a charismatic community.  For a long time, he was a kind of under-shepherd to his local community and he was humbled that he had been chosen by them to lead discussion  and prayer.

He stressed that his new pastor does come to their weekly meetings which are held in church and attended by about twenty people regularly. Only about forty people show up for Sunday Mass, though.

“I am very happy in my church when I pray from a charismatic viewpoint,” he said. We do have some things we must clean up, though.”

A Catholic Belgian to the left of me and next to him a Muslim from Tunis. A Hindu to the right of me. My intercontinental flight was a smorgasbord of discussion on contemporary religion. It reminds me that far from being irrelevant to people, religion is contemporary and urgent.