In my youth,  I entered into the circle of the Congregation of the Resurrection seeking healing and hope, first of all. But, more than that, I always had the idea that I simply wanted to help people.  I remember when I was 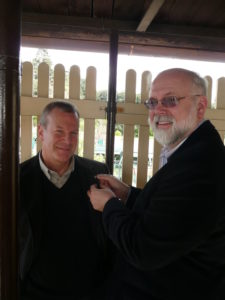 a fifteen or sixteen expressing this desire clearly to myself.  It was natural for me and I thought everyone felt that way, too.

I still think that each of us in the Congregation wants to be useful to the Lord and His Church in whatever way Our Lord deems fit.  Regardless of our disabilities, we are seeking the light of Jesus to dawn on us.  God loves us, each of us, for who we are.  We are tasked to let this light shine on those the Lord places in our path.

Kat Banakis (Christian Century, December 20, 2017) relates a story about a summer’s day when she was walking with her grandmother who was wearing a simple top which revealed her shoulders and upper chest.  A guy passes and says, “Hey, you too?” a reference to the scar on her chest where she’d had open heart surgery.  Older people recognize others with the same physical realities just like children do. A skinned knee, an arm in a cast or just the same running shoes are noted.

Banakis goes on: “There is a band of people with shared experience all round me…. In my less harried moments Sometimes I wonder what secret networks the people I pass on the street are part of– people who have run marathons or written plays or taught someone else to drive or had a sibling with special needs, the people who donated blood yesterday or live with an eating disorder.”

People sometimes bring to the surface their membership in shared experience just like the guy who out of the crowd yells out his knowledge of what grandma went through. Not often, but, sometimes, my community members share their scars.  We are a community populated by individuals who, in the words of the forgotten author who wrote that people he knew formed a community of “the used, the abused and the utterly screwed up.”  I’d add To that list those whose weakness to alcohol, gambling, food or some other burden makes them understand the sadness of others.  And, yes, some of us  so wrapped up in ourselves that we seem to need no one to walk with through this life. Then, there are those whom society has rejected because of physical or psychological disabilities. Some of us walk with some kind of a limp everyday.

Not for any subversive reason have I included the photo of two of my confreres in my religious community. One man pins the lapel of his brother in community with an emblem of our resurrection brotherhood. It is a tiny vexillum, a banner symbolizing victory.  It is the banner of the Risen Christ.

Somewhere in scripture it says that He uses the weak to confound the proud.  Ain’t it the truth!

These days I bristle when I hear someone up-talking.

Up-talkers sound the ends of their sentences with a vocal upswing so that when they relate some event or express an opinion, each statement sounds like a question. Here is a real question with a natural upswing at the end: “Does Donald Trump brush his hair each morning?” Hear the words rise until they climax at the final syllable of “morning.”  The questioner wants you to answer yes, or no, or something else.  An up-talker might say something like this: “I’m not sure? I’ve heard that it might be a toupee?”http://wlrn.org/post/uptalk-downtown-new-yawk-robert-siegel-explored-how-we-speak

Lets talk about another aggravating mannerism. Some people “um” their ideas. “Um…I’ve been wondering …um…whether his hair is…um real or not.”
And, even worse: “Is his hair– like– real or not? Is he -like- going to this hairdresser everyday to– like– fix it up so that he can– like– face the day?”

Although pros who interview guests on TV and radio have not succumbed to up-talking, the people they interview often do up-talk, a lot. Even these professional guests have adopted this curious form of response.  When they relate an incident or support their views with a story, sometimes the entire narrative sounds uncertain:

“I’m sort of working on a new novel ?… which is kind of a story about recent presidents’ hairstyles?.. It’s kind of a memoir because I knew the last four presidents and it was -like- sort of a natural for me?

Notice the annoying habit of using words like “sort of” and “kind of” as modifiers which work to soften what comes next: “Trump has a kind of  Bozo thing going with his stylist.  In my novel, Trump kind of stashes stuff under his pompadour.  When he kind of stages a haircut coup he sort of loses his grip on the populace.  I was -like- blown away when I-like- discovered this. Totally awesome!

Just thought I’d note this trend of indecision which has crept into our conversations. It’s sort of a virus which has -like- squirmed into our narratives and makes us sound -like- were unsure of what we are saying? Why can’t we just-like- mean what we say?