Sister Abilia, eighth grade teacher and diminutive Franciscan Sister who tried valiantly to control her students while they dealt with the hormonal vagaries of being fourteen years old, held out to us as a model of virtue the severe holiness of Padre Pio, now St. Pio. Her descriptions of Padre Pio’s piety contrasted with the ups and downs of teenage life in the eighth grade. Who would not be impressed with accounts of the bearded Capuchin’s bleeding hands and the marks of the nails which Padre Pio tried to hide with sleeves which reached down to his palms? When he prayed the canon of the Mass with hand extended, the photos taken of his hands with their dark marks made me uneasy. 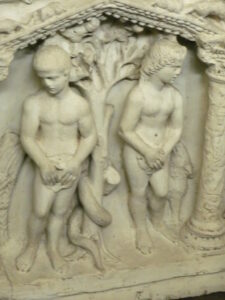 Eve and Adam, a bas-relief on a sarcophagus.

Though he did not leave the monastery where he lived for decades, the faithful came for healing, mainly of their hearts.  I remember that Sister Abilia reminded us that he listened to confessions for many hours each day. She thought we should go to confession often –another allusion to hormones that regularly raged through the eighth grade.

My own teenage curiosity led me to find out that the Santo was not always nice to be around. His brothers in community had to tolerate all the hordes of people that invaded the monastery daily if only to glimpse the good father. Padre Pio was sometimes harsh and grumpy. When I found that out I realized that saints are not perfect, no matter what artists over the centuries have led us to believe. All of us have an undeniable shadowy side. The effects of original sin are with us stomping around in our hearts, even the best of hearts.

These days the iconoclasts are tearing down the statues of our American historical icons including Christopher Columbus (It isn’t his fault that he became the “discoverer” of America)  Robert E. Lee and other Confederate heroes are hunted and knocked off their pedestals. Jefferson is in trouble. Washington, too. There are thunderclouds even over the sixteenth president’s images. Some are re-thinking the Lincoln memorial in D.C.

Cardinal Dolan in a piece for the Wall Street Journal a few weeks back reminds us that we’ve had movements like this before. America’s historical personalities all had flaws, “yet all of them still contributed a lot of good to our nation’s progress.” Later in the article he says “…I want to remember the good and the bad, and recall with gratitude how even people who have an undeniable  dark side can let light prevail and leave the world better.”