According to a recent poll, 69% of Catholics say Jesus is only symbolically present in the Eucharist.  About a third of those polled believe in His actual presence: real food, bread and wine, become the flesh and blood of Our Savior. 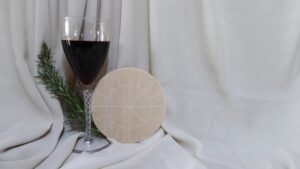 The Eucharistic Bread and Wine.

I’m in the second group but I don’t understand His presence as meat. If that reference sounds crude to you — it is.  I remember discouraging a parishioner from showing a film in our parish hall that purported to show at Holy Mass a cracked and bleeding host.

But! what about the story in John’s Gospel (Jn 6:55-63) where Jesus faces this issue head-on. He says “My flesh is real food and my blood real drink.”   And, His hearers say in disgust, “How can this man give us His flesh to eat? We then read that many walked away after hearing this. What sane man asks that his flesh be eaten?

Why is it so easy for us to materialize this message that we hold by Faith?  It seems to me that His presence in the Eucharist goes way beyond descriptive or scientific terms.  Yes, you might argue, but doesn’t transubstantiation define the physicality of this greatest mystery of our Faith? St. Thomas Aquinas, using the philosophical concepts of Aristotle describes the substance of the bread and wine being recreated as the substance of Christ.

Although, the bread and wine after consecration look and taste like what they appear to be, St. Thomas describes what we see and touch as only the “accidents” of bread and wine. The substance of these elements is Christ himself. And, that miracle of  Faith is beyond our reasoning.

I have respect for but less belief in consubstantiation where using a similar Aristotelian analysis, the bread is present with the Body of Christ and the wine is present with His Blood, both substances present in each instance.  I have little respect for trans-signification, where the purpose of the bread and wine changes from being mere food to the elements of the sacrifice of Jesus. Bread and wine placed on the altar and offered to the Father changes its significance and become the Body and Blood of Christ. Nothing physical happens.

Jesus means what He says, not what we think He means. I believe He is truly present, though what I eat seems bread, and what I drink appears to be wine. It’s as if love itself becomes for me a real thing in both the bread and the wine. This I believe by Faith. I understand that Jesus used the words “body” and “blood” but it means that when I receive Him in the Eucharist, He in all his human and divine reality unites himself to me in a mystery of love.  For God is love. It is what I have been searching for my whole life. What about you?

« Listening for God.
Our Titanic Catholic Church is Sinking. »