“They’re taking down my old church!  I was baptized in that church,” said the young girl as she looked up at me with tears in her eyes.  She watched the crane swing up towards the steeple and then turned away. I don’t hear much from any of the other observers. They seem to be accepting the inevitable. 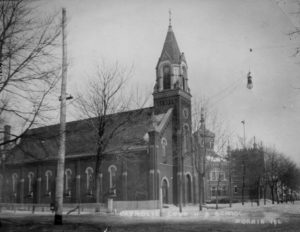 We’re talking about Immaculate Conception Church in Morris, Illinois built 166 years ago. The roof had begun to leak badly and some of the bricks were beginning to crumble especially near the foundation of the church, and no services had been held in the building since the new church was built nine years ago.

People have been driving up in their pickups just to watch silently as the skillful workers bring down the old church.  For these on-lookers some of whom are parishioners, memories of weddings and funerals flood their hearts as the old church comes down. A few people bring lawn chairs to watch. Most just stand around or sit in their trucks observing the demolition from the schoolyard across the street.

It is interesting to see how carefully the old church comes down. There’s a chain-link fence erected around the perimeter to protect the site and keep the on-lookers out. I live across the street from the church and am listening to the creaky squeals of the crane as the operator lifts it’s jaws high above the steeple and slowly tears the exterior away to reveal the skeleton of where the bells were at one time. The staccato whine of the backup-signals of the trucks carrying the debris away continues throughout the next three days.

The workers carefully dump a half-ton of bricks outside the fence and men and women drift over and carefully select a brick or two that they want to keep as a tangible memory of what once was their church home.  Not everyone needs one, but some do. As soon as the bricks are dumped, one old guy who had been sitting on the hood of his pick-up slides down and walks slowly toward the pile.  He stands there a moment and then selects his brick, a dark red one, well-worn. I wonder what he was thinking as he salvaged the brick? Others come and take a brick or two as a remembrance.

The church is first in ruins and now in piles of broken brick, fractured wood joists and wall-rubble.   Plaster fragments from the roof and walls flutter down and are met by a worker aiming a stream of water that dampens the material as it comes down.  There is very little dust.

The Catholic Church in the U.S. is decommissioning and taking down old churches like this one. But, just down Jackson street, less than a block from the old site, the new IC church, much bigger than the old testifies to the vitality of the current members of the parish. The bells that were heard on the hour and on the quarter-hour from the old church tower are now announcing time and calling people to Mass from a hidden speaker above the main entrance to the new church.

There is something sad about this demolition. It’s a kind of death where the old structure is torn apart, falls and becomes a pile of rubble. The workers undertaking the clean up remove the remains and bury them in some landfill while the onlookers stand by silently and respectfully.

« Serve the Lord with Gladness; Come Before Him Singing for Joy.